Rebuttal to "Crock of the Week - Flogging the Scientists"

Peter Sinclair AKA "Greenman" a cartoonist and Al Gore disciple has been hard at work creating YouTube videos that smear skeptics and their arguments. The following is a complete rebuttal to his "Crock of the Week - Flogging the Scientists" video.


1. Sinclair claims that as a "non-scientist" he has found that the most "reliable" scientific information comes from "respected" peer-reviewed science journals. The problem with this statement is the use of subjective criteria. First he is admitting to be a "non-scientist" so why would anyone take his advice on where to find "reliable" scientific information or on what journals are more "respected"? Regardless what is considered "reliable" or "respected" is purely subjective and cannot be objectively determined. Now it is true that within the scientific community more scientific credibility is applied to "peer-reviewed" publications which is why skeptics have extensively published in peer-reviewed journals. Being peer-reviewed however does not mean something is a scientific truth, only that it has passed a certain level of scrutiny within the scientific community. There are documented cases of the corruption of this process,


2. Sinclair then uses a strawman argument by comparing peer-reviewed journals to the conspiracy website InfoWars, the conservative news site WorldNetDaily and the UK's conservative newspaper the Daily Mail. Despite these site's excellent coverage of Climategate (even conspiracy sites get some things right) they are never confused by prominent skeptics with peer-reviewed journals.


3. In an attempt to attack the Daily Mail article, "Climategate U-turn as scientist at centre of row admits: There has been no global warming since 1995" Sinclair uses an article from what he calls, the "conservative" Economist magazine. The problem is the Economist magazine is not conservative,

This appears to be a failed attempt by Sinclair to pretend a conservative source agrees with his position.


4. Sinclair uses a quote from the original BBC interview with Phil Jones that actually makes the skeptics case,


BBC: Do you agree that from 1995 to the present there has been no statistically-significant global warming?

This question originated with Dr. Richard Lindzen, Ph.D. Professor of Atmospheric Science at MIT who has been trying to make a point about the ridiculously small fractions of a degree in temperature change that are being debated. When standard error bars are applied to these, you are left with no statistically significant warming in 15 years. Without statistical significance you cannot rule out that any recent positive warming trend did not occur by chance or in this case, measurement error. 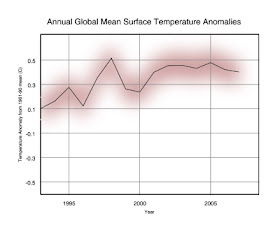 5. Sinclair then dishonestly implies that Dr. Lindzen is "denying" the mild warming trend over the last century which is blatantly not true,


"Most of the climate community has agreed since 1988 that global mean temperatures have increased on the order of one degree Fahrenheit over the past century," - Dr. Richard Lindzen

6. Sinclair harps on a recently retracted paper on sea-level rise that for obvious reasons was widely discussed on skeptic websites prior to it's retraction. The retraction he claims was based on the findings of a recent PNAS paper by Steven Rahmstorf who's 2007 paper on the exact same subject in the journal Science was discredited,


"We revisit the application of the statistical methods used and show that estimation of the regression coefficient is not robust."


"Although we agree that there is considerable uncertainty in the prediction of future sea-level rise, this approach does not meaningfully contribute to quantifying that uncertainty."

7. Sinclair then goes off promoting Al Gore like fear-mongering of over 6 ft of sea-level rise by the end of the century, ignoring both the IPCC and a recent review of the science in an article in the journal Nature,


"This issue was highlighted by the Intergovernmental Panel on Climate Change (IPCC) in its 2007 assessment report. They concluded that 'understanding of these effects is too limited ... to provide a best estimate or an upper bound for sea level rise' in the twenty-first century. Excluding these effects, they projected a sea level rise of 0.26–0.59 metres [10-23 inches] by the 2090s for their highest-emissions scenario.

The available evidence still doesn't allow us to say with certainty whether sea level rise could exceed the IPCC's projections.

...Although increases of up to two metres this century can't be ruled out, this does not mean that they are inevitable or even likely."

Other peer-reviewed papers show even less to worry about,


"It is concluded that the best guess value of Sea Level Rise for the next 100 years is a relatively modest 23 cm +/− 5 cm [9 +/- 2 inches] which poses little threat to coastal areas of the world either at present or in future."

8. Sinclair repeats the big lie that the Climategate emails do not undermine climate science. The significance of the emails and how they undermined the credibility of the climate science community and thus the science itself was exposed in a 2010 U.S. Senate report,


9. Sinclair lies that the South Dakota legislature passed a resolution urging schools not to teach the science of climate change, when the resolution says no such thing. It explicitly states that they recommend some points be included with the instruction of global warming. You can pause the video and read this for yourself. The wording of the resolution is also poor and it is fairly clear the legislature meant astronomical not astrological and geothermal not thermological. All the more reason politicians should consult scientists if they are not sure about scientific terminology.


10. Finally Sinclair lies about Marc Morano's comment about public flogging when the website it was quoted from explicitly says, "He doesn't wish anyone harm". For someone who likes to use clips from Monty Python Sinclair sure has a hard time identifying sarcastic remarks from those he is trying to smear.